Ruling on answering the phone whilst praying! 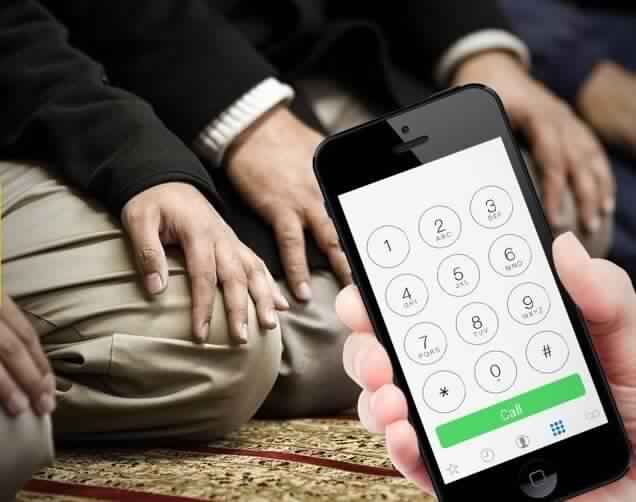 Many times the phone starts to ring while we are praying at home, it may keep ringing which is quite distracting from praying. Is it permissible in such cases for the worshipper to take a few steps forwards or backwards and pick up the receiver and say “Allaahu akbar” or raise his voice in recitation so that the caller will know that he is praying – by analogy with (the hadeeth with speaks of) opening the door to one who knocks or raising his voice so that he can hear you?

The Answer: If the worshipper is in the position that you describe and the phone starts ringing, it is permissible for him to lift the receiver, even if he has to move a little way forward or back, or to the right or left, on the condition that he keeps facing the Qiblah and he says ‘Subhaan Allaah’ so that the person who is calling will know (that he is praying).

It was narrated in al-Saheehayn that the Messenger of Allah (peace and blessings of Allah be upon him) used to pray whilst carrying his granddaughter Umaamah. When he did rukoo’, he would put her down, and when he stood up he would pick her up again. According to a report in Muslim, this was when he was leading the people in prayer in the mosque.

Ahmad and others narrated that ‘Aa’ishah (may Allah be pleased with her) said: “The Messenger of Allah (peace and blessings of Allah be upon him) was praying in his house with the door closed.  I came (to the door) and he walked over and opened the door for me, then he went back to his place.” She mentioned that the door was in the direction of the Qiblah.

Al-Bukhaari and Muslim narrated that the Messenger of Allah (peace and blessings of Allaah be upon him) said: “Whoever notices something alarming whilst praying, then men should say ‘Subhaan Allaah’ and women should clap their hands.” (Bukhari and Muslim)

And Allah is the Source of strength. May Allah bless our Prophet Muhammad and his family and companions, and grant them peace