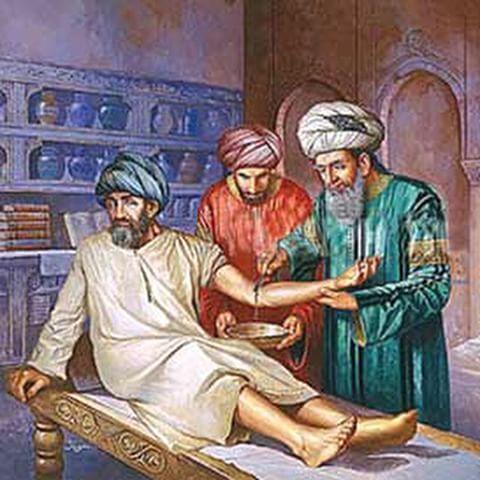 There is no doubt that the medical profession is one of the greatest professions on earth, because its concern is the human who is the successor of Allah on earth. The Islamic civilization contributed to advancing this science through the exceptional efforts of the Muslim scientists who were pioneers in improving this science and spreading it. One of these pioneers is a scientist who was specialized in medicine, philosophy, mathematics and astronomy, in addition to other scientific fields, is Abu Yusuf al-Kendi, the philosopher, physician and astronomer. He wrote many comprehensive encyclopedic books in medicine, mathematics, astronomy etc.

Abu Yusuf Ya’qūb ibn ʼIsḥāq al-Kindī (c. 801–873 AD) was born in Kufa and died in Baghdad. He grew up in Basra where he received his early education, then moved to Baghdad and continued his education.

He was born to an aristocratic family, his father Ishaq was the governor of Kufa during the reign of al-Mahdi and al-Rashid. He descended from al-Ash'ath ibn Qays, a great Companion of Prophet Muhammad. The family belonged to the most prominent families of the tribal nobility of Kufa in the early Islamic period. He was the ruler of the entire Kinda tribe, and so was his father Qays ibn Ma’od Yakrib.

al-Kindi was in conntact with the rulers of his time, he had a strong relationship with al-Ma'moun, al-Mu'tasam and his son Ahmad al-Mutawakul. He worked in their court with sincerity and dedication to serve science and scientists. This is why he was appointed as the physician in the Caliphate Palace and also the Head of Diwan al-Kharaj (Finance Department) for a long time.

The Caliphs' interest in al-Kindi was due to his status and encyclopedic knowledge; he authored books in medicine, mathematics, astronomy, geometry, philosophy and logic.

Al-Kendi mastered translation as well, as he was able to translate Ptolemy's (Almagest), and (Compounding Medicines) by Galen in medicine, this is why al-Kendi is considered one of the masters of translation.

Looking at his books in medicine, we will find that he is a skillful scientist who has experience in medicine as much as in astronomy and philosophy. His scientific contribution is not less than those who excelled in medicine such as Al-Zahrawi and Ibn Zhur…etc.

Some of his works include:

Hippocratic Medicine, Lethal Food and Medicine, Fumes Which Purify the Air from Epidemics, Remedies of Hurtful Smells, Hemoptysis, the Practices of Healthy People, the Function of the Brain, Leprosy and its Remedies, Ailments of the Stomach and Gouts, Spleen Remedies, Curing Sadness, Explaining Compounding Medicines by Galen, Discussing the Importance of Medicine etc.

Al-Kendi was a unique intellectual man, he has more than twenty researches in medical sciences. It was said that he has a thousand books in each science, all of them tackle chapters of Aristotle books, this is why he was called the Philosopher of Arabs.

If you look at how things were at that time, you would be amazed. Al-Kendi lived in an era of scientific advancement and prosperity, scholars were supported and encouraged by the Caliphs, seeking knowledge was highly praised and sponsored. Libraries were built, translation and translators were influential, and the knowledge of other nations were made available to Muslims, so they started to read and analyze these works, they absorbed them, then added and developed their content. Al-Kendi was not the only one in that regard, there was other contemporary intellectual and thinkers such as Ibn Rushd, better known in the Latin West as Averroes and Ibn Sina, known in the Latin West as Avicenna. All these scholars were polymath scholars who excelled in medicine as well as philosophy and numerous sciences.

The brilliance of Al-Kendi in terms of medicine is quite clear in his advice to the doctors. He says: "The doctor should fear Allah and not to take risks, there is no compensation for a lost life." He also said: "As much as the physician wants to be told that he is the reason for the remedy of the ill, he should also be careful not to be told that he was the reason for his sickness and death." He said: "The wise person should realize that there is always more knowledge than his, so he should be humble, the ignorant would think that he reached the end of knowledge, and he would be hated for that."

Ibn Abi Osaybayah quoted al-Kendi in his advice to his son saying: "Al-Kendi said 'O Son the father is a lord, the brother is a trap, the paternal uncle is a sorrow, the maternal uncle is a poor consequence, the child is a disappointment and the relatives are like scorpions. Saying 'No' removes plight, and saying 'Yes' ends blessings, listening to music is so powerful, as a person may listen and feels the pleasure of music, leading him to spending a lot of money, and then becoming poor, then ill and eventually die. The dinar is like a feverish person, if you spend it, it dies, and the dirham is like a locked person, if you release it, it will escape. The people are means so take what is theirs and keep what is yours. Do not accept anything from someone who committed perjury, because it impoverishes the person like a barren land….."

Ibn Abi Osaybayah commented on this advice and mentioned the description of ibn al-Nadeem of al-Kendi that he was cheap. On the other hand, advice shows the philosophy of al-Kendi and makes it quite clear. The father is a lord, because he is the lord and protector of the family, the brother is a trap because if the relationship becomes bad between two brothers, each of them would keep scheming against the other. The paternal uncle is a sorrow if he becomes greedy and steals from his nephews and nieces, causing distress to them. A-Kendi goes on in expressing his philosophy, but there is nothing which proves that he is cheap, yet there is some sort of carefulness when it comes to spending especially that he is advising his son. The only one who called him cheap was Ibn al-Nadeem.

Here are some of al-Kendi's famous sayings quoted by Dhaheer al-Deen al-Bayhaqi in his book the History of the Wise of Islam (Tareekh Hukama' al-Islam):

This was the life of al-Kendi, a sea of knowledge. He contributed heavily to medicine and also other fields of science. His books are sought after all over the world, proving his brilliance and genius.

Source: The Story of Medical Science in the Islamic Civilization by Dr. Ragheb El-Serjany